Church Registers     Deeds & Documents   Membership & Minutes
Baptisms
​The church records begin in 1787 with the baptism of James, son of Edward and Isable Cleasby of Reeth.  A searchable database of baptisms from 1787 to the early 20th century is available online at FreeReg.

Marriages
Until the introduction of Civil Registration in 1837 marriages, even of nonconformist couples, had to take place in the local parish church at Grinton.  Subsequently, although the church building is authorised for marriages, it does not keep its own registers, so the ceremony requires the presence of the local registrar.

Burials
​Burials have taken place in the graveyard since at least the early 19th century but the only register begins in 1876 with an unnamed female child of Hannah White, aged one day.  A number of earlier burials are recorded in the baptism register and in the register of Low Row Congregational Church. These, along with records from the legible gravestones and plaques, are available online at FreeReg. 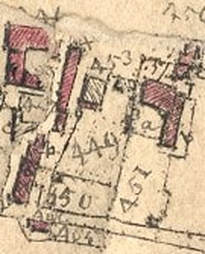 A close up from the 1840s Tithe Map shows the shape of the original church. The plot numbered 449 is the present church garden and the church is the black shaded building in its top left corner
Deeds & Documents
At present the earliest document mentioning the site is a conveyance dated 1728 in which Thomas Douglas the elder, his wife Martha, and their son Thomas Douglas the younger, make over a piece of land adjacent to the family home to Marmaduke Douglas, their youngest son.

In 1759 Marmaduke and his nephew, another Thomas, sold the whole plot to Charles Wensley who already owned the property to the west.  Martha is specifically mentioned in the later document as being '...the only child and heir at law of John Kirton, formerly of Reeth, Taylor, deceased...' implying that at least part of the property has been inherited from her family.  The Kirtons were Catholic recusants - if they had a private chapel in the house this may explain stories about the Congregational church being built on the site of a medieval chapel.

In 1783 Charles Wensley's grandson sold the property to '...​David Bradberry of Ramsgate in the Isle of Thanet gentleman...'.  Bradberry had actually been an ordained Independent minister for many years but may have been cautious of publicising this until the land purchase had been completed.  Most property in the village was copyhold, belonging to the Lord of the Manor.  The church site was one of the few pieces of freehold land and it's possible that Bradberry waited until he could buy this rather than building on copyhold ground which could have been subjected to outside interference.

The first church had presumably been built by 1787 when the registers begin. A Trust Deed was drawn up in 1794 detailing the way in which the church was to be run and in 1797 Bradberry handed over to Trustees the land and '...also all that Chapel, Oratory or place of Assembling of a Congregation of Protestant Dissenters called Independents and the Vestry thereto belonging erected and built by the said David Bradberry upon the said Plot of land.'
Membership Lists & Minutes
Whitehead's History of the Dales Congregational Churches (1930) implies that minutes of the church meetings date from the 1840s but unfortunately any records prior to around 1870 have subsequently been lost.
On the flyleaf of the oldest existing book is a list of members in 1868: Mary Hutchinson, Elizabeth Longstaff, John Deighton,
Thomas Slack, Elizabeth Littlefair, Isabella MacLeod, Helen Robinson, Ann Spensley, Winifred Race.
For the first twenty years or so records were kept sporadically and frequently illegibly.​

It was unanimously resolved to invite Mr McCormack to be the Pastor of the above named Church.

​Church meetings have been held at intervals but nothing of any importance has occurred.  Mr McCormack resigned on November 30th 1890, nothing having occurred during the period of his ministry to interrupt the harmony and peace of the church.

Dr A B Kernot was elected to serve the church as Secretary.  (This office has been vacant for more than thirty years).

The handwriting didn't improve much but the record keeping became far more precise!
From time to time a note is made that someone has come into membership of the congregation or moved away but there is no separate membership roll.  Work is ongoing to transcribe the minute books - please get in touch if you would like a search to be made for individual names.