Names of early ministers differ and dates are inexact.  A letter, quoted below, from Rev John Allason of Low Row to Joshua Wilson of Islington, dated April 1830 [Congregational Library ref: Hb 11/24] provides some names which are missing from  other lists.

From The Evangelical Magazine 1797
17?? - 1797 Joseph Fabius Millward
"I presume he was a hearer of Mr Bradberries at Manchester, he was a student of Dr Addington's ordained at Reeth....He married here.  His widow is now living near you in Islington at the Retreat for ministers' widows".  Millward was in Reeth by at least 1788 and married in Grinton in 1791.

1797 - abt 1810 George Cook(e)
"Born at Heckmondwike...he was ordained at Reeth, declined the ministry and is still living here".

abt 1810 - 1813 William Stott
"...a native of Wakefield, student at Rotheram (sic) he was here about three years and removed to Market Weighton."

1816 - 1822 Stephen William Underwood
"...born [1763] at Islington, entered the Countess of Huntingdon's College at Trevecca in August 1782 where he continued three years but marrying contrary to the rules he incurred the displeasure of his patrons and left that connexion.  The last time he preached in Reeth was the last Sunday in October 1822 when he returned to Bristol and now preaches there near the Tabernacle."
​
1823 - 1825 John Coanes
"...a scholar of Mr Kell's at Homerton...at Reeth, removed then to Folkstone...where he is at present..."
During John Coanes' short ministry in Reeth his mother Ann was buried in the graveyard by Rev Allason who recorded it in the Low Row register.

"A Mr Longhurst supplied a short time, married a rich wife at Richmond, entered a student at Cambridge and intend to take the gown".  There are no date for Samuel Longhurst's time in Reeth but he married Ann Harrison at Richmond on 5th Sept 1826 and entered Queens' College Cambridge the following year.

1825 - 1835 John Allason
​Was the minister at Low Row but stepped in to supply Reeth when there was no resident minister. 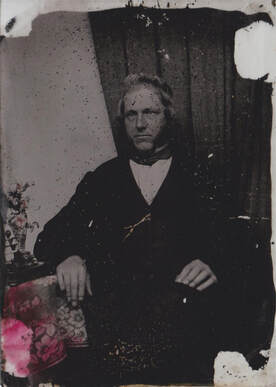 1850 - 1870 Matthew White (left)
The son of a joiner from Kirkburton near Huddersfield, Rev White was trained at The Pickering Home Missionary Academy.  He oversaw the rebuilding of the church and the purchase of the Manse.

1871 - 1874 Joseph Woollard
A former London City Missionary he came to Reeth after three years at Keld and later moved to Richmond.